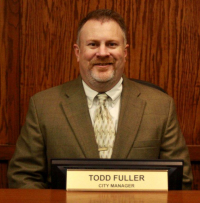 Todd Fuller has served as the City Manager of Red Oak since June of 2011. Prior to this, he has served as assistant city manager, economic development coordinator, director of economic development, interim city manager, director of planning, and acting public works director. Born and raised in Ellis County, Todd and his wife Jenny have one daughter and one son. Todd serves on the Hospital Board of Trustees for Baylor Medical Center in Waxahachie. He is also an active musician and songwriter playing lead guitar and sharing lead vocals for a local band on the weekends.

After graduating from Waxahachie High School in 1988, he received his Bachelor of Business Administration in 1991 and his Master of Business Administration in 1993, from Tarleton State University in Stephenville, Texas. Prior to joining the City of Red Oak, he owned and operated an agricultural supply
business serving the Ellis County area.
Contact Us
Public Safety
Pay Online
Public Library
Employment
[]