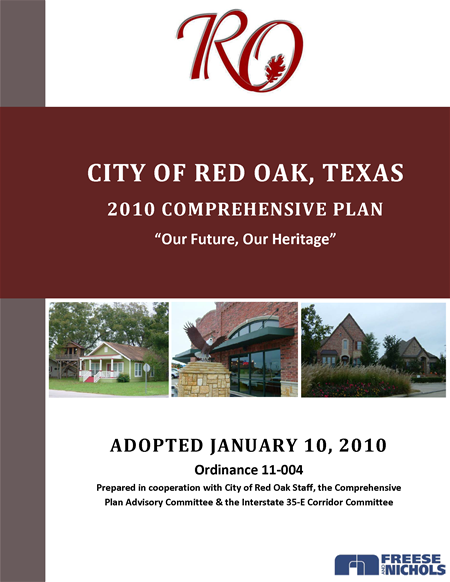 Much of the explosive growth is occurring within fringe communities—communities situated along the edges of the developed/urbanized metropolitan area, of which Red Oak belongs. Red Oak has experienced steady to rapid growth in conjunction with the metropolitan area as a whole. In 1970, the population of Red Oak stood at 767 persons. By 2009, the City had grown to nearly 11,000 residents, according to both NCTCOG estimates and Freese and Nichols field survey estimates. Even more striking has been the growth of the community since 2000—the City’s population more than doubled within the past nine years.

The rapid growth of Red Oak creates the need for the creation of a Comprehensive Plan and Interstate 35-E Corridor Vision. Red Oak remains in the early stages of its maturity as a City; therefore, now is the time for the community to formulate a plan to guide decision-making by City Council and City Staff. The 2010 Comprehensive Plan and Corridor Vision are intended to serve as flexible policy guides for the community and are intended to reflect the types of land uses, mobility options, neighborhood characteristics and general quality of life amenities desired by the community.

A city’s comprehensive plan can be defined as a long-range planning tool that is intended to be used by City staff, decision-makers and citizens to guide the growth and physical development of a community for 10 years, 20 years, or an even longer period of time. The purpose of this 2010 Comprehensive Plan for Red Oak is intended to serve as a flexible and living guide for both current and future decision makers within the community. The State of Texas has established laws with regard to the way in which incorporated communities can ensure the health, safety and welfare of their citizens. State law gives municipalities the power to regulate the use of land, but only if such regulations are based on a plan. Specifically, the law states:

What should the future hold for Red Oak? What should the City be like in 2020 or 2030? These are the key questions that this chapter addresses. The vision for Red Oak described within this 2010 Comprehensive Plan will help shape and direct growth and development for the next ten years and beyond. In order to do this effectively, this plan should be premised upon a shared vision of what Red Oak should become as it grows, attains its anticipated build-out configuration, and becomes an increasingly mature, livable and sustainable City.

In order to create this shared vision, numerous meetings with Comprehensive Plan Advisory Committee (CPAC) members and City leaders were held. Members participated in a Visual Character Survey, a Strengths, Weaknesses, Opportunities and Threats (SWOT) exercise in which members focused on various internal and external issues in Red Oak and an issue identification exercise where members prioritized a list of identified issues seen to be facing Red Oak.


The thoroughfare system forms one of the most visible and permanent elements of a community. It establishes the framework for community growth and development and, along with the Future Land Use Plan, forms a long-range statement of public policy. As the alignment and right-of-way of major transportation facilities are established and adjacent property developed, it is difficult to facilitate system changes without significant financial impacts. However, by incorporating programmed land uses and densities of the Future Land Use Plan, strategies can be developed that maximize the land use/transportation relationship.


The right of a municipality to coordinate growth is rooted in its need to protect the health, safety, and welfare of local citizens. An important part of establishing the guidelines for such responsibility is the Future Land Use Plan, which creates an overall framework for the preferred pattern of development within Red Oak. In general, the Future land Use Plan is intended to be a comprehensive blueprint of Red Oak’s vision for its future land use pattern.

The Interstate 35-E Corridor Plan is intended to work conjunctively with the 2010 Red Oak Comprehensive Plan to promote positive and quality development and redevelopment along Interstate 35-E. Components of the Corridor Plan include a discussion of land use standards, site design principles, architectural design, aesthetics and gateway elements. This Corridor Plan is intended to strengthen the City’s economy and protect the visual perception of Red Oak depicted along Interstate 35-E for both residents and visitors. The standards and discussions set forth in this Corridor Plan will provide a basis for the creation of an attractive visual image for Red Oak and will support and aid the City in attracting and maintaining quality land uses.

The ultimate vision for the Interstate 35-E Corridor Plan is to create a positive and identifiable image for the City which increases the tax base, encourages appropriate and organized development, provides quality architectural design, increases the community’s quality of life, promotes pedestrian oriented sites and creates a sense of community and place. Consideration for such issues will ultimately serve to aid in the long term sustainability of the corridor.


There are many intangibles that make a city or town livable, such as a sense of community, a strong sense of place in particular areas, civic pride and the friendliness of neighbors. Livability in Red Oak will be discussed in two primary areas. The first will be a discussion of Neighborhood livability—the different components of creating desirable and sustainable neighborhoods. The second component will be a focus on enhancing the image and ensuring the livability of Red Oak as a whole.


A new Downtown Vision Plan (Plan) has been completed and approved by the Economic Development Corporation (EDC) and City Council. The goal of this Plan is to make the Downtown area a destination point, and a gathering place for Red Oak families as well as commerce and business. This Plan will facilitate and encourage future development in the downtown area, as well as provide a general concept for development and redevelopment.

It should be noted that it is not the intent of the city to remove and replace existing development, but to provide a guide for development as it occurs naturally in the real estate market. The Plan will also create a pedestrian friendly environment and assist in solving traffic issues in the area. Amenities such as historic street lighting, monument signage at major intersections, pavement features, water features, and cultural features are included in the Plan as well.


The EDC, City Council, and Parks Department will work together to prioritize and begin construction on infrastructure improvements in a phased process for both a short-term and long-term approach.


View designs for the new downtown and a map of the City of Red Oak.